ERBUD invites children to the construction site. A series of workshops “Młode MajstERki” in the Copernicus Science Centre begins

ERBUD Group launches another initiative to promote construction engineering among the youngest. “Młode MajstERki” is a series of workshops organized in cooperation with the Copernicus Science Centre and aimed at girls.

How to build without collapsing? What does concrete consist of? How does a rangefinder work? These are just some of the questions that will be answered by participants of workshops “Młode MajstERki” organized by ERBUD and Copernicus Science Centre. Participants and their mentors will be able to use various construction tools and challenge themselves with construction issues. They will also learn about the components of mortar and try their hand at building a brick wall. All this, of course, in a helmet and waistcoat to reflect the atmosphere of a real construction site.

- Construction is not only about designing and erecting new buildings, but also about searching for and then using unconventional solutions. Whoever succeeds in this, gains an advantage. We are already committed to safeguarding the future not only of ERBUD, but of the entire industry, which is underutilising the enormous potential of women. We want to encourage the youngest generation’s interest in construction and make ERBUD the company of first choice. This is our investment with, perhaps a deferred, but I am sure, significant rate of return – says Dariusz Grzeszczak, CEO of ERBUD Group.

“Młode MajstERki” is a series of June workshops aimed primarily at girls aged 6-9 years, which will take place at the Copernicus Science Centre in Warsaw. The programme was developed jointly by experts from Copernicus in consultation with ERBUD engineers, who will also be attending the workshop as guests, to help the participants with the tasks and, at the same time, talk about working on the construction site. Tickets are available at www.kopernik.org.pl/klarabuduje. The workshop was held under the patronage of the Faculty of Civil Engineering of the Warsaw University of Technology.
The June series is a pilot, but ultimately ERBUD intends to make the initiative a permanent part of its activities, and the lesson plans will be distributed free of charge to schools and other educational centres throughout Poland.

– Who do girls want to be in the future? Mostly doctors, teachers, astronauts, youtubers. Young children always choose professions related to the performance of specific tasks. It's easy for them to imagine themselves in a role - in the office, in the school classroom, in front of the camera. And on a construction site? Why not? Because they have no idea what such work entails. Moreover, they associate construction with men’s work - they know Bob the Builder, but not Clare, who also builds. The time has come to change that. We hope that the “Młode MajstERki” workshops, co-organized with ERBUD, will help to draw girls’ interest to building. And when they discover how interesting constructing is, they will more willingly choose studies and engineering professions – explains Katarzyna Nowicka, a spokesperson for the Copernicus Science Centre.

“Młode MajstERki” is another action of the ERBUD Group aimed at girls. In April, Poland’s leading construction group, in collaboration with the ERBUD Wspólne Wyzwania Foundation, published an exceptional book. “Klara builds”, by Jakub Skworz, attractively illustrated by Paulina Derecka is a universal story about creating not only buildings, but also relationships and self-confidence. This is also a story about the value of having dreams, not being afraid of challenges and consistently pursuing one's goal. The book was published under the patronage of “Wysokie Obcasy” (Agora Publishers) and its version in Ukrainian was also released. The first batch of books was sold out in the first week of sales. “Klara builds” will also be a gift for every workshop participant at the Copernicus Science Centre. 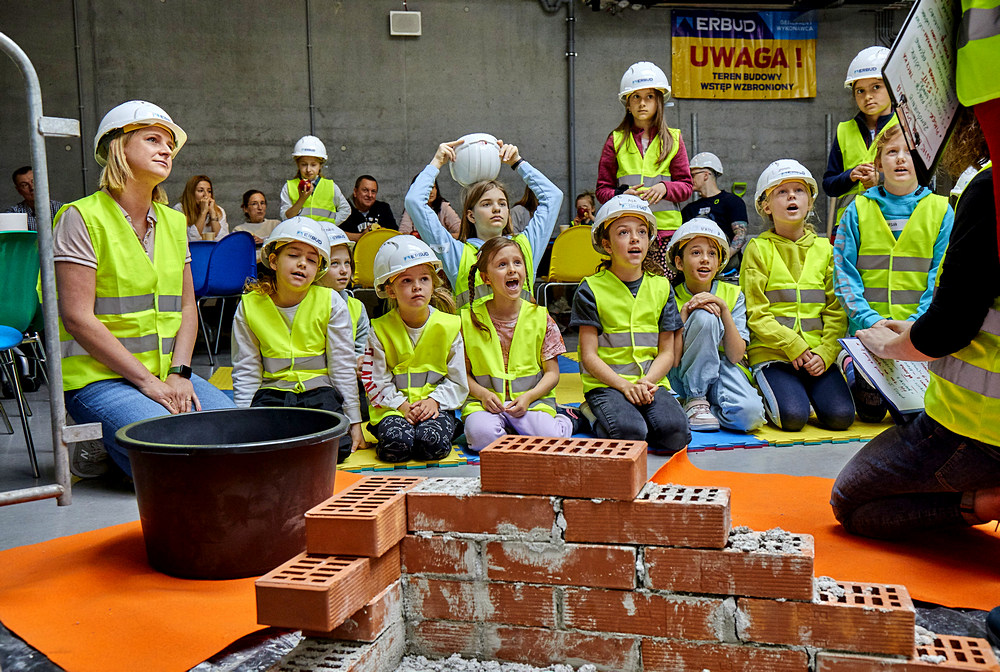