ERBUD publishes a book for girls about building

ERBUD has found a way to fill the staffing gaps in the construction industry. The company is launching a great campaign promoting construction among women. At the beginning, together with the ERBUD Foundation, it published a book for girls. "Klara buduje" (Klara builds) is a universal story about a girl who decides to make her dream come true and build something that no one has ever seen before.

The book written by Jakub Skworz, author of the bestseller "Mania Skłodowska" – a book about Maria Curie-Skłodowska, and beautifully illustrated by Paulina Derecka is a must-read not only for the youngest. It is a story about building not only buildings, but also relationships and self-confidence. The message of the book is that it is worth having dreams, not being afraid of challenges and consistently pursuing the set goal.

“ERBUD changes the world not only by building modern structures, but also by striving to free the world from thinking in terms of limitations and stereotypes. One of them is the belief that there are occupations reserved for one sex only, construction being one of them. And although in recent years the number of women at technical universities has been growing, there is still much to be done,” says Dariusz Grzeszczak, Chairman of ERBUD.

“In the coming years, construction sites will be short of half a million workers. We, as ERBUD, are already thinking about the challenges associated with this. We want to ensure a competitive market, and "Klara buduje" is the first educational step in this direction. We are already thinking about girls who will appear on the labour market in 20 years,” says Agnieszka Głowacka, Vice-Chairwoman of the Group, one of the few women on the boards of construction companies in Poland.

„Levelling the playing field and piercing glass ceilings pays off for everyone. The foundation of our HR actions is the creation of an environment in which each employee is assessed on the basis of their competences, not gender or age, and the actions we take are quite specific. Every fifth person in a managerial position at ERBUD is a woman. In our company women’s remuneration is 97% of men’s remuneration, and the disproportion is the result of seniority, not gender. This is a very good result compared to the rest of the construction industry,” adds Dagmara Sobolewska, HR Director in the ERBUD Group.

One of the characters in the book is inspired by Agata Karczewska, construction manager at ERBUD S.A. "I am a living proof that a construction site is not only for men. The execution of a construction project is work in dynamically changing conditions, requiring both flexibility and firmness. The position of the construction manager is extremely demanding work, which, however, gives a lot of satisfaction. It is a false belief that construction is a male profession. It is a matter of character, predisposition and competence. Let's not be afraid to have dreams, to work consistently and boldly to make them come true, let's develop our passions,” encourages Agata Karczewska, who coordinated the fulfilment of the contract for the Centre for Research and Conservation of Cultural Heritage UMK in Toruń, and currently is the construction manager of the "Lidl Oleśnica" project.

The media patron of the book is Wysokie Obcasy (published by Agora), and the honorary patron is the Copernicus Science Centre. Data on the situation of women at universities were prepared for ERBUD by the author of the project ciekaweliczby.pl.

„Klara buduje” was also published in Ukrainian. The ERBUD Foundation is conducting a wide-ranging aid campaign for refugees, e.g. it is helping in the relocation of children from an orphanage near Kiev to Poland.

„Klara buduje” is the first in the series of ERBUD books, the purpose of which is to introduce the construction industry with its fascinating secrets to girls so that in the future they may consider choosing a career in this area.

The book will be available for purchase at klarabuduje.pl. The proceeds from the sale will go to the ERBUD Foundation and be used e.g. to help children from orphanages to enter adulthood. 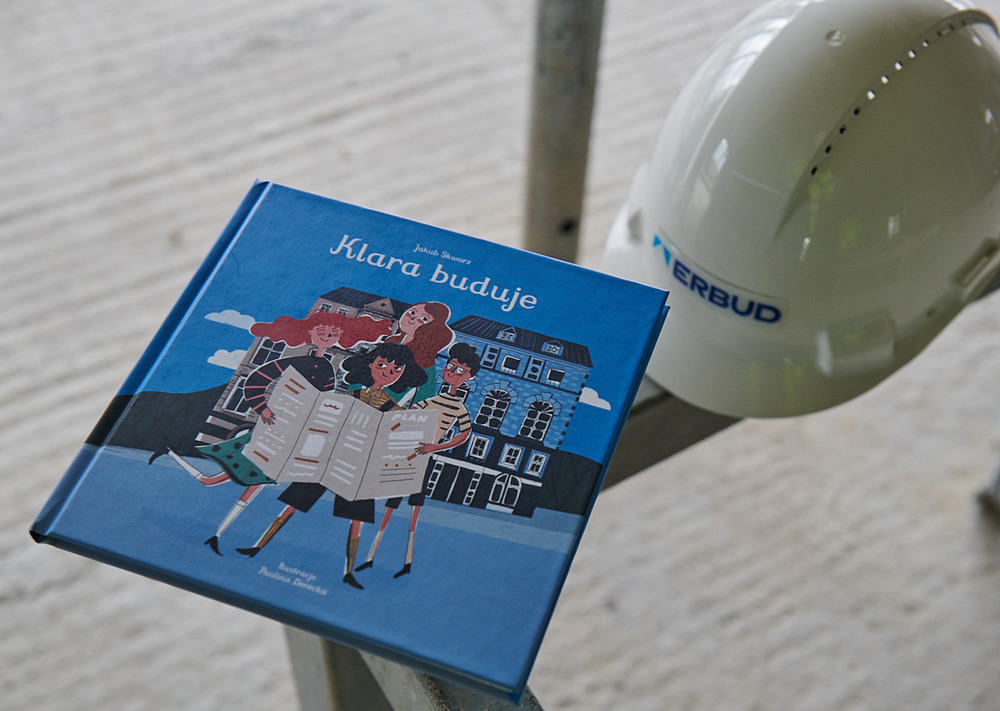