Already this Saturday (October 8), an extraordinary sporting event - the “Players of the Year” will be held at the sports and entertainment hall in Ostróda. The opening edition of the Olympics, organised by the Eryk Grzeszczak ERBUD Wspólne Wyzwania Foundation, will be attended by more than 160 participants and over a hundred supporters from all over Poland.

Children from foster homes in Chełmno, Elbląg, Morąg, Unisław, Ostrzeszów, Pasłęk and Zielonka will participate in the Olympics. Participants will challenge themselves in original individual and team competitions. Not only that, however - there will also be competition in the stands, where judges will assess the flags and cheering of the fans. The winner of the Olympics will receive the first prize - a sports holiday.

- You are most welcome to support! We seldom manage to bring so many of our youngsters together in one place. They will have the opportunity to compete against each other in sports competitions, however the games have been thought out and arranged in such a way that every participant will feel like a champion. Our goal: encourage the pupils to take an interest in sport and make it a daily habit. – emphasises Lucyna Grzeszczak, President of the ERBUD Wspólne Wyzwania Foundation.

The “Players of the Year” Olympics will begin at 12.00 p.m. in the sports and entertainment hall at 22 Kościuszki Street in Ostróda. Admission to the event is free.

“Players of the Year” will be another of this year’s initiatives of the ERBUD Wspólne Wyzwania Foundation. The first edition of the Tour de Erbud (TdE) was held in August. The cycling event attracted almost 100 participants; each kilometre covered was worth PLN 10. ERBUD Group employees participating in the TdE did not disappoint and, ultimately, PLN 91,195 was transferred to the account of the Eryk Grzeszczak Foundation.

In April 2022, a book was released to the market. “Klara builds”, by Jakub Skworz, gorgeously illustrated by Paulina Derecka is a universal story of creating not only buildings, but also relationships and self-confidence. The book was sponsored by “Wysokie Obcasy” (Agora Publishing House) and a version in Ukrainian was also published. The first batch of books sold out in the first week of sales. 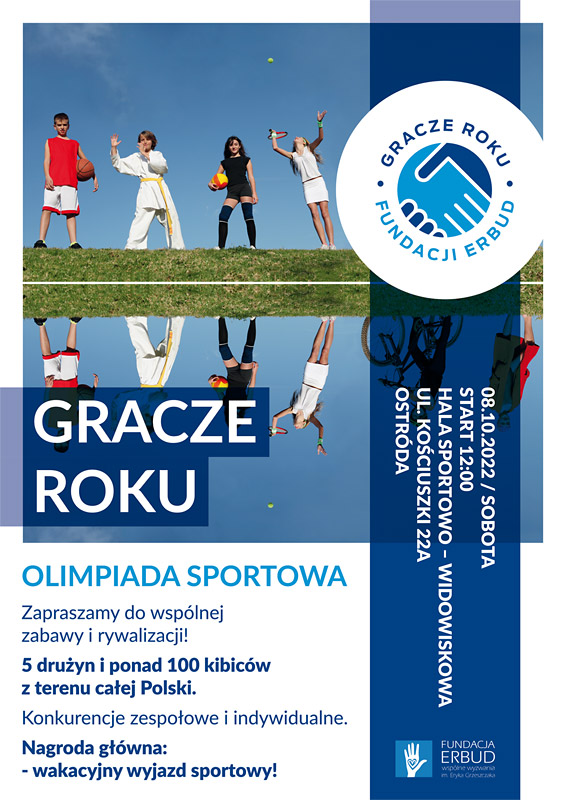